KAYAC Co., Ltd. (Head Office: Kamakura City, Kanagawa Prefecture, Representative Director and CEO: Daisuke Yanagisawa, TSE Mothers: 3904) has a total of 83,263 cases (period: April 1, 2021 to March 31, 2022) in which 34,000 general users registered with smout, a migration and related population promotion service operated by its company, have “fabo (interested)” in the information transmitted by the region(period: April 1, 2021 to March 31, 2022). The results will be announced as “SMOUT Migration Award 2021”. 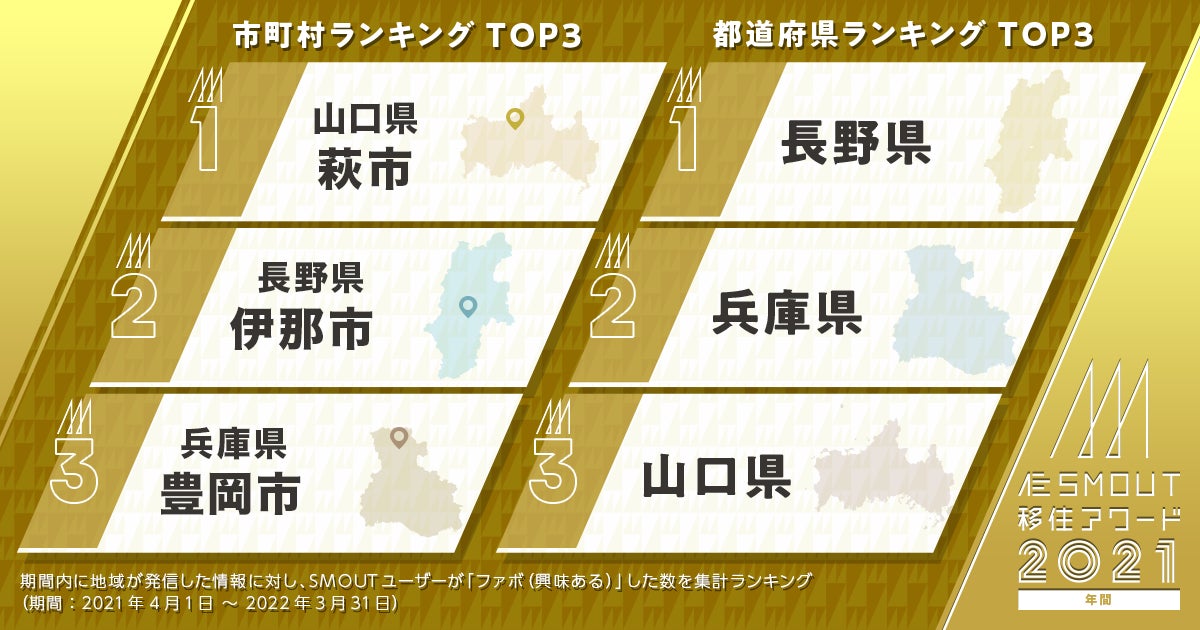 The Corona disaster, which began in 2020, is now in its second year. According to the 2021 Basic Resident Register report released by the Ministry of Internal Affairs and Communications on January 28, the movement of people to leave the city center has exceeded the number of moving in, the first time since 2014, when Tokyo’s 23 wards began compiling figures including foreigners. Over the past two years, remote work has been firmly established, mainly in the Tokyo metropolitan area, and hotels and local governments have also moved to promote work. Smout also has about twice as many work-application projects in hot spring resorts, historic districts, and sea and mountain resorts than last year.

In addition, by utilizing the “Specific Regional Development Business Cooperative System” established by the Ministry of Internal Affairs and Communications in June 2020, recruitment of “multi-workers (engaged in the business of multiple businesses according to seasonal labor demand)” to support the way of working double-work, and projects using words such as “semi-agricultural x X” increased by about 10 times from last year (2 cases in FISCAL 2020 → 21 cases in 2021).

As remote work has become more and more established, there are more and more migrants, but on the other hand, there are more and more mismatches after emigration. For this reason, there was a deep-rooted need for “migration experience tours” and “trial housing” where you can try and migrate before moving and experience life, and it has gained popularity for experiences in hot spring resorts and old private houses.
Smout had 33,762 users as of March 31, 2022, about 1.5 times higher than at the end of March 2021 (23,037). We will continue to provide a platform that serves as a bridge between users and local residents who think about diverse lifestyles and work styles.

Smout, a platform service that promotes migration and related populations, has implemented the SMOUT Award, which recognizes local activities every fiscal year since its launch in June 2018. Due to the corona disaster that has continued since 2020, the number of members has doubled compared to 2019 due to the increased freedom of residence through remote work and exiting the city center. From fiscal 2021, not only municipalities but also prefectures were eligible for awards, and in October we made an interim announcement for the first half of the fiscal year. We will announce the final results for the 2021 year and commend the regions that finished in the top three. 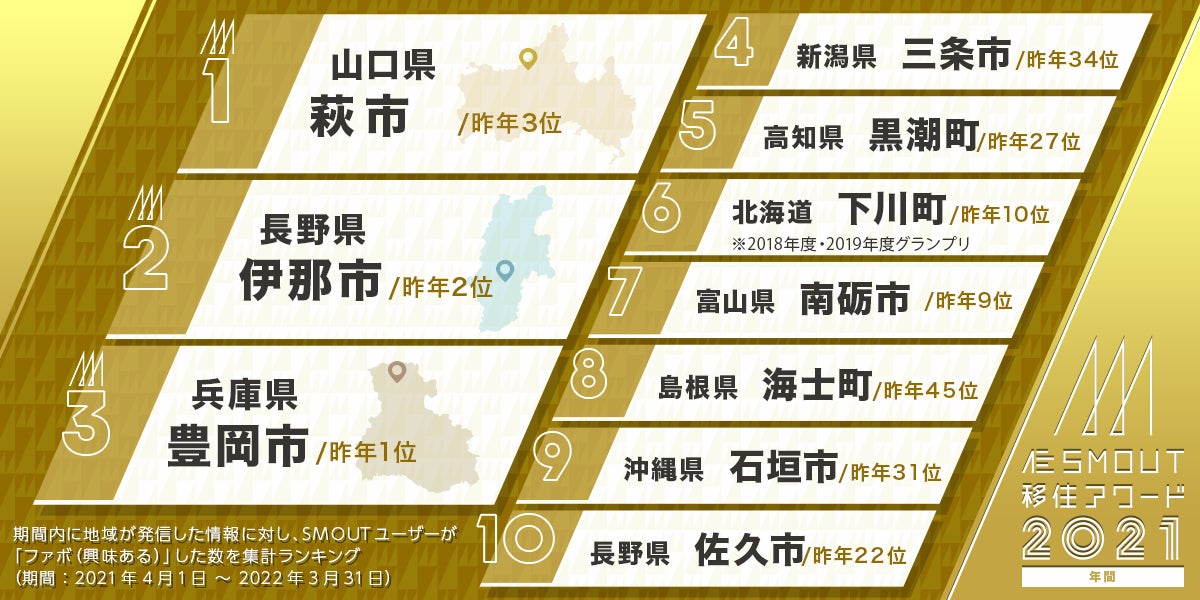 1st Place Hagi City, Yamaguchi Prefecture
Hagi City jumped from 3rd place in 2020 and 4th to 1st place in the first half of 2021. Based on the trend of work, projects covering a wide range of themes in a well-balanced manner, from history and culture, nature, hot springs, old private houses, vacant houses, and related populations to migration, were lined up and attracted popularity. The Regional Revitalization Cooperation Volunteers are active as “local editors”. It is also characterized by discovering local content, transmitting the charm of Hagi with photos, videos, and texts at a high frequency, and contributing to the creation of related populations. In addition, yamaguchi Prefecture was among the first to introduce recruitment utilizing the Ministry of Internal Affairs and Communications’s “Specific Regional Development Business Cooperative System” to have employees work as multi-workers by combining work from multiple business sites, and is attracting attention.

Examples of < popular projects>
・ [Scheduled to open in March 2022] Would you like a small business and staff in an old private house built 200 years old?
Work planning start! Why don’t you enjoy a day off while working in a city full of history and nature?
・ \ Yamaguchi Prefecture’s first / Multi-work to do various work throughout the season! We are looking for staff of hagi regional development cooperative!

2nd Ina City, Nagano Prefecture
Ina City remained second in 2020. The regional revitalization cooperation team of “24 hours a week, side job OK” is also characteristic, and I promote it well, such as singing in the title in the project. Agriculture and forestry are also conspicuous, such as “a practical school that rediscovers and re-edits the value of forests”, and it is characterized by a unique perspective. In the 2020 top three awards, ina city, Hagi city, toyooka city jointly conducted “experience plan to help farmers”, three cities held a joint online event and snacks and became a hot topic. In addition, Ina City is attracting attention for educational migration. It is popular when you can receive a variety of education unique to the school in an environment rich in nature. The recruitment of career education coordinators connecting local communities and children through education and the project of online school tours were also ranked high.

Examples of < popular projects>
・ 24 hours a week, side job OK / / Why don’t you start a farmer’s vacation as a regional revitalization cooperation team?
Shinshu Inagaya departure! Inagaya Forest College is a practical school for public-private collaboration.
Why don’t you rediscover and re-edit the possibilities of new forests by crossing the border between areas and industries?
・ Deciding on a help program is your “I want to do it!”.
Why don’t you find a relationship with the local regions that go beyond agriculture?

3rd Toyooka City, Hyogo Prefecture
He finished third, the same as in the first half of 2021. The number of regional revitalization cooperation volunteers will be about 50 if the number of people who will arrive in the future will also be. The area where this many is gathered is one of the leading areas in Japan. We promote urban development through movies and theater, and actively recruit creators such as theater festivals× town planning, and recruitment of art lovers. In addition, it is an area that can not be overlooked by unique projects such as craftsmen of “straw work”, leaders of traditional industries such as traditional crafts such as “Toyooka Koyanagi zaiku”, hunter experience, high school students and community development.

Examples of < popular projects>
8/3 deadline! I want to convey the charm of “flying local Toyooka” to the maximum! We are looking for friends who will blow together!
First of all, one week at a great deals! Why don’t you move with your family to Takenohama Beach, kansai’s premier beach?
Communication is also available!
・ January 10th End The first step in the cooperation team! The craftsman of “straw work” inherited in the hot spring town of 1300 years old
Why don’t you aim?
Go ☑ to see a real hunter. Why don’t you go to the hunting ground with the hunter of “Almost zero annual meat fee!”?
We are recruiting at any time in one set only at a time! 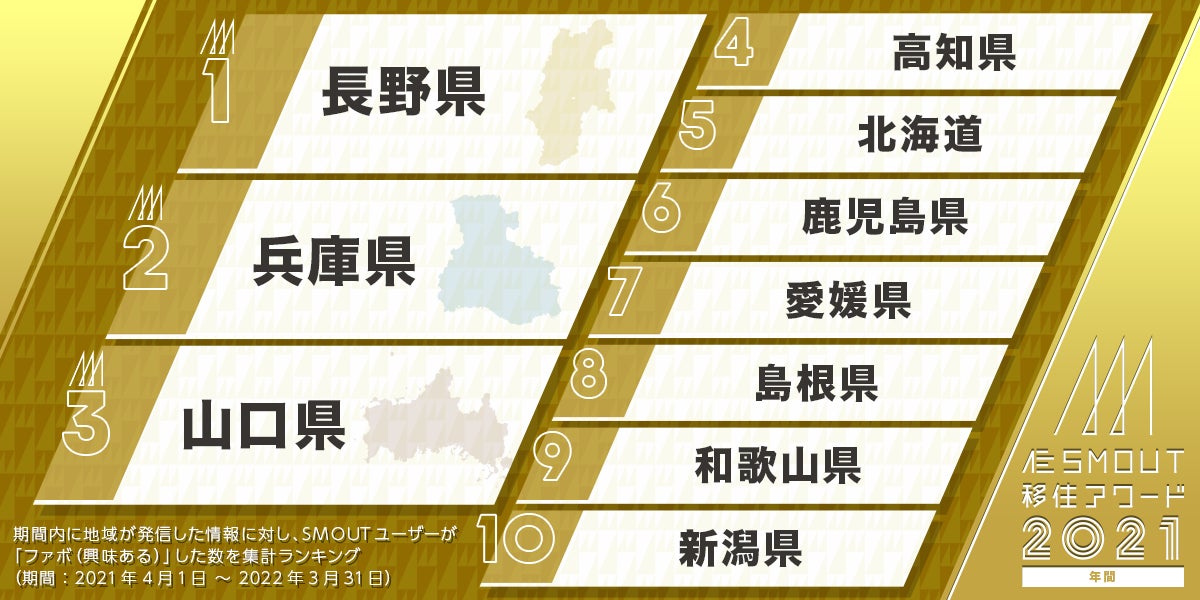 1st Nagano
Nagano Prefecture, which followed the top in the first half of 2021, moved away from second place or lower. The shiojiri city project, which called for the clean-up of vacant houses together, which is a good example of the creation of a related population, became a hot topic in the SMOUT team as a novel project. Online tours of vacant houses in Iida city and Komagane city are also popular. It attracted attention because it was easy to see vacant houses in the area while staying at home.

Examples of < popular projects>
・ “Create your own Ibasho!” [Attack empty house bank] Put away! Regional contacts starting with.
Let’s do it together!! Deep digging of the depth of the related population @ Shiojiri City, Nagano Prefecture (Shiojiri City)
・Why don’t you live a life that will make your dream come true while doing stable half-farming in a strawberry garden that has lasted for 25 years? (Komagane City)
・ [We are still recruiting participants! ] Why don’t you look into an empty house while you are at home?
– Online Seminar Iida no Mori ‘Vacant House Tour’ – (Iida City)

2nd Hyogo
Hyogo Prefecture remained second in the first half of 2021. In addition to Toyooka City, which ranked first, the northern regions such as Yabu City and Kami Town produced many attractive projects and contributed. In each region, the popular “Regional Revitalization Cooperation Volunteers” project attracted attention. In addition to the cooperation team, the use of vacant houses, entrepreneurship, and the recruitment of people to do new things, such as connecting side jobs and side jobs and side jobs with local businesses, became popular.

Examples of < popular projects>
8/3 deadline! I want to convey the charm of “flying local Toyooka” to the maximum! We are looking for friends who will blow together!
(Toyooka City)
・ [Local Revitalization Cooperation Volunteers Recruitment] Why don’t you work on migration measures and vacant house measures and liven up Yabu City together! (Yabu City)
・ Why don’t you come to see me because you moved in love with your uncle? ~ 1 night and 2 days migration experience tour ~ (Kami town)

3rd Yamaguchi
Yamaguchi Prefecture, which is third, also remained third in the first half of 2021. In addition to hagi city, which ranked first, projects in Mine City and Iwakuni City in the prefecture also fought well. It was characterized by outdoor activities, hot springs, and migration and related population measures that launched the island, taking advantage of the benefits of nature-rich land. In addition, the introduction of the live streaming event “YY! Turn College” in Yamaguchi Prefecture is also ranked high. Yamaguchi Prefecture itself won 781 fabos in its own projects, and the dissemination of information mainly by the prefecture was successful.

Examples of < popular projects>
Akiyoshidai only “won”! Japan’s largest karst plateau life experience tour (Mine City)
Work planning start! Why don’t you enjoy a day off while working in a city full of history and nature? (Hagi City)
・ [Outdoor × Delicious living】 Why don’t you manage a café at a stay-type exchange base that can be used in Abu town? (Yamaguchi)

Smout users aggregate the number of “fabos (interested)” during the period for information transmitted by the region and ranked.

＝＝＝＝＝＝
KAYAK Co., Ltd.
https://www.kayac.com/
With our strengths in creativity, planning capabilities, and technical capabilities that are not bound by fixed concepts, we provide users with new experiences that combine the latest technologies and ideas such as game apps, advertisements, and website production, community currency, migration and related population promotion. 90% of our employees are creators such as designers and programmers, and we have a unique personnel system and management that makes use of diversity based on the management philosophy of “increasing the number of people who make it”. 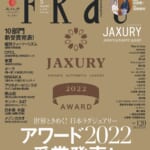 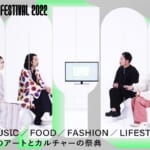